This topic is for something I call The Great Lie.

I call it this, because everyone in America, and much of the Western World, has been lied to about some basic facts of life. These facts concern an idea fundamental to Western thought in the Modern Tradition, and that is the idea of progress.

Basically, we're all told things will get better with time. Science advances, society becomes more progressive, and the economy grows, so your standard of living will be better than that of your parents, and that your children will have it better than you did.

Without going into the philosophical arguments for this, I want to point out one simple fact: since the early Clinton Administration, we've been lied to about the growth of the economy.

So, what does this graph show? Simply, it shows the old measure of GDP (Gross Domestic Product) in blue, vs. the new measure of GDP, in red. GDP is used to measure if the economy is growing or shrinking. Basically, the Clinton Admin changed the way GDP was measured, so that the economy looked better than it really was.

What does this mean for you? It means for the last 20 years or so, (look at the blue line) the economy has been declining, and in recession for almost all of the 21st Century. This decline was hidden during the 1990s. The 'average' of the red graph is almost a straight line, showing constant growth, while the 'average' of the blue line shows a steady decline. The red line starts to give up after 2000 and the average can't hide the decline anymore, while the blue line continues the steady decline into negative growth.

So, in practical terms, things have been getting worse. But living with the belief that things get better, many people have had to rely on credit cards and refinancing their homes in order to MAINTAIN a standard of living from 20 years ago!

Don't believe the lies! The mainsteam media wants you to believe that the bubble and housing crisis was purely the result of people being too excited, and greedy, and wanting more and more. Yes, this is true for some people, but many others were living at the same standard they always did, not realizing it was getting harder and harder to maintain that standard.

Why didn't they know? Because a bunch of economists decided to change the methodology of economic measures.

Want to see another one? Here's inflation.

What does this chart represent? It shows inflation, which is the change in prices over time. For example, something that cost $1.00 in 1990 now costs roughly $2.00.* Things get more expensive with time. Look at that graph! Using the old measure, (the blue line), inflation has been approaching 10% for the entire 21st Century.

What does this cart mean for you? Well, the Clinton Administration also changed the way inflation was measured. Before, they'd take a bunch of food, and things people typically need to live (called a basket of goods) and measure how much it cost. Then, each month, they'd compare the cost this month to the cost last month, and tell you how much more expensive things are. That's inflation. They were measuring changes in the cost of living.

But now, with changes in the methodology, they use several techniques to change the measured rate of inflation. I'll explain one of them here, called substitution.

Well, this makes sense. It shows how people behave, and how much money they're spending, right?

There are other things they do, but this is a big one because it's easy to see how you're being lied to!

As the story goes:

A little before the French Revolution, Marie Antoinette, the queen of France, was told that the peasants couldn't afford to buy bread, because of the heavy taxation.

Soon after, the French Revolution began.

Well, The System is telling the American people is exactly the same: can't afford butter? Eat margarine instead.

* I pulled this is off the top of my head for the sake of example. People in the know, please don't shoot me over the specific value of this number.

iZaros wrote:One thing I dislike a lot os oil prices. They only increase and why? Because we are told oil will run out soon.
Consider for example, that Saudi Arabia single handedly accounts for almost 20% of the world’s oil reserves. The details of how much is in each field is a state secret, but it claims to have 264 thousand million barrels. This is a little strange, since it reported that it had 262 thousand million barrels ten years ago, and 260 in 1989. Saudi Arabia has pumped around 8 million barrels of oil a day for twenty years, but its proven oil reserves have gone up rather than down. 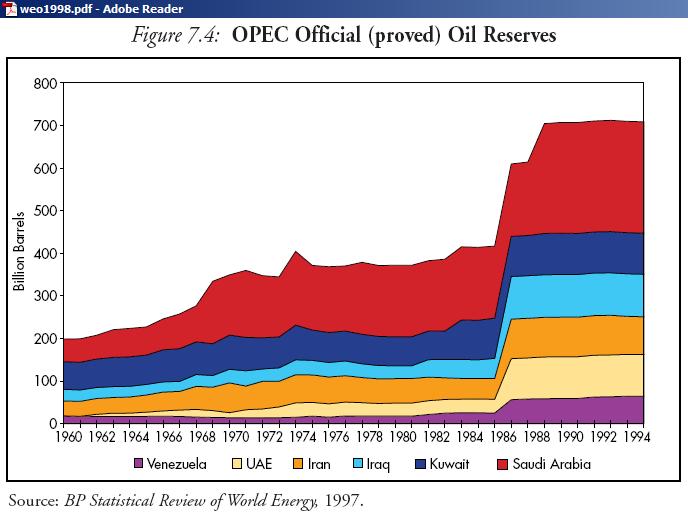 I think they lie about the amount of oil they have in order to keep the price up, after all if there is more then enough oil on our planet and everyone knew it the price wouldn't increase this fast.

i Zaros wrote:One thing I dislike a lot os oil prices. They only increase and why? Because we are told oil will run out soon.
Consider for example, that Saudi Arabia single handedly accounts for almost 20% of the world’s oil reserves. The details of how much is in each field is a state secret, but it claims to have 264 thousand million barrels. This is a little strange, since it reported that it had 262 thousand million barrels ten years ago, and 260 in 1989. Saudi Arabia has pumped around 8 million barrels of oil a day for twenty years, but its proven oil reserves have gone up rather than down.

Oil reserves and price are only very loosely related. Price is much more related to supply and demand, The demand for oil, both though population growth, and increased demand from growing economies like China, India, and Brazil, means that the price is going to go up. The graph of supposed reserves doesn't at all address the price of actually extracting that oil.

Check out the Wikipedia article about Peak Oil, and specifically about how accurate statements concerning reserves might actually be.
http://en.wikipedia.org/wiki/Peak_oil#Concerns_over_stated_reserves

I suggest you watch the Chris Martenson Crash Course. His section on oil and energy is excellent. The whole course is a MUST-WATCH for everyone.
http://www.chrismartenson.com/crashcourse

Also, check out Collapse, by Michael Ruppert. If this is what peak oil will result in, do you think the price will go down?
http://topdocumentaryfilms.com/collapse/

Plus, there's good old-fashioned inflation, and debasement of the currency. And the price of oil is usually correlated to the exchange rate of the US dollar.